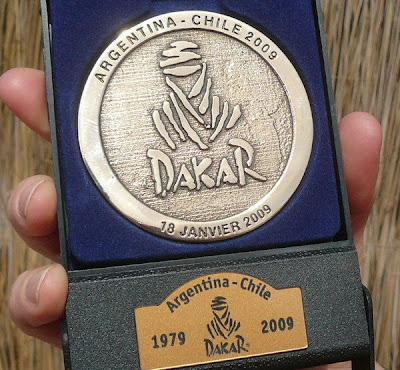 Fri, Jan 16: Our trip through Argentina / Chile is coming to an end, and what better way to cap it off but by experiencing the finale of the inaugural running of the Dakar Rally here in South America! We arrived in Buenos Aires to stay with friends - they moved into a house in NorDelta, right on a canal. Temperatures have risen steadily, and the site of the pool in the yard was like an oasis in the desert.

Saturday morning we rode north out of BA on Ruta 9 to encounter the rally finishers heading into town. After passing dozens of rally bikes, cars, and trucks, we turned around to follow them in and experience the local fever. Argentineans are a passionate people; their first love is futbol (soccer), followed closely by rally racing. We followed 3 rally cars into the city, down the famous Av. Libertador, towards the finish line. 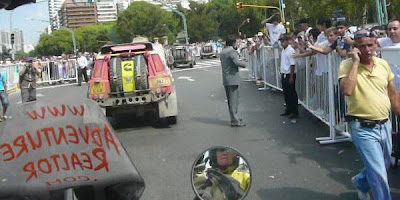 Have you ever seen the finish line to a really big race? Usually there is a corrider for contestants lined by police barricades and cheering fans. The corrider in this case was about 2kms long, and well stocked by cheering fans and police. Tucked in tight behind the 3rd car, we made it all the way to the finish line before a french organizer spotted the posers...


When we parked the bike, many people came to take pictures. One woman handed me her naked baby - I wasn't sure what to do, so placed him on the sheepskin covered seat while his mother took a photo.

We spent Sunday at the podium finish of the Dakar, having scored a rider's pass for me (Chris), and a mechanic pass for Erin back in Valparaiso - basically we had full access. Check out all the photos

Robby Gordon, an American hero here in Argentina - the audience loves him and he loves them...


When we tried to leave at the end of the day, we were once again swarmed on the bike. We told the fans we were not actually racers, and their reply was, "no importa". We signed shirts, hats, flags, and bodies. Fun and embarrassing all at the same time...


The rules are clear; our motorcycle can only stay in Argentina for 8 months as a temporary import. Otherwise you must permanently import it and pay about $10,000 in taxes. We spent Friday patiently going around to a slew of different government offices. As experienced travlers, we are pretty good at finding solutions to problems, and after initially told "no" we were granted a special extension.

On Tuesday, the aduana showed up at the house to complete the paperwork for the extention we needed. We're all set for our return in November. 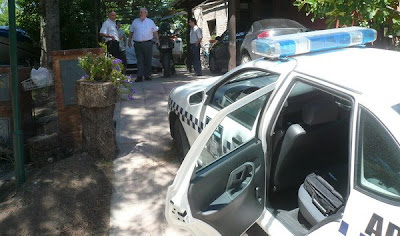 We spent most of the day on Tues locked in front of CNN. Thoughout the trip we were asked about Obama and no matter who we talked to (South Americans, Europeans, Australians), everyone was excited about our new president. 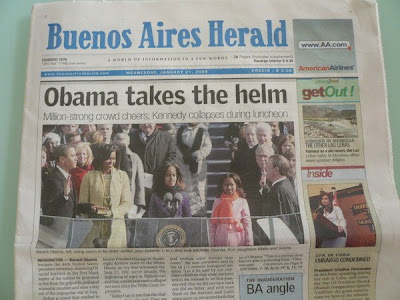 As a last hoorah, we took the 46' launch out on to the Rio del Plata.


The temperature in Buenos Aires was 32C, while back in Denver it was 32F and snowing when we landed. Brrrr - Welcome Home!

Popular posts from this blog 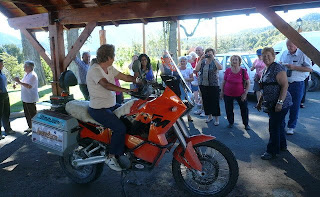 Often times people stop and take pictures next to the bike, often when we are in restaurants or simply not around. In this case, two bus loads of travelers from Buenos Aires stopped just to chat with us. They asked what the cost for a photo on the bike would be, and Chris, always trying to enhance international relations, told them a kiss would suffice. We're not sure if these seniors were happier to sit on the bike or share a kiss.... After two restful days in Pucon we were on the road again to cross the border into Argentina and to San Martin de Bariloche at the end of the day. Rather than take the paved, beautiful pass we had taken several times the last time we were here, we decided to take a different, more interesting route south through the Chilean lake district and east to the Chilean border at Puerto Fuy. The ride started out as a welcome cool, foggy day with the roads rising and falling through green pastures and around beautiful lakes. We got to the quiet village of P
Read more 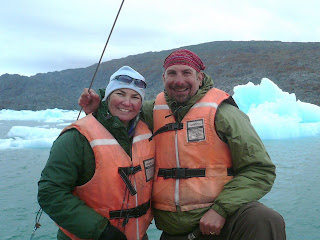 The end of the road… what a great destination! We’re in Villa O’Higgins, in the southern end of mainland Chile. The Carretera Austral stretches through this area of fjords and glaciers, and after more than 700 miles of sand, gravel, rocks, potholes, corrugation, a ferry, and some of the most stunning views, it comes to an end here. Dec 11, 2008 - We entered Chile again near Futaleufú, a small town known around the world for its class 5+ rapids. Kayakers and rafters from all corners of the globe come to test their skills against the mighty Futaleufú. Unfortunately, a recent eruption of the volcano near Chaiten has blanketed the town in a thick layer of fine ash. The air has been tough to breath for several months, but these hardy folks are staying put, and the short tourist season is about to begin. As we rode along the bank of the Rio Futaleufú, the crushing sound of the waves reverberated off the canyon walls and up to the road. We stopped at a small bridge where rafters unload, a
Read more